The Billiarts (their name is sometimes written with a “d” and sometimes with a “t”) were living in Cuvilly for generations.  On the genealogic tree are found merchants, bakers, stonecutters, weavers, cattle dealers, farmers…

Jean-François was married to Marie-Louise Antoinette Debraine in 1739; together they had 9 children of which three survived:  Marie-Madeleine, Julie and Louis.

Marie-Madeleine (1744-1819) married Léon DEGOUY and had 4 daughters one of whom was Felicity (born in 1772), who from the age of 7 took care of her infirm aunt, Julie Billiart.  It was in 1803 that Felicity separated from her aunt in order to marry the teacher of Saint-Ouen, Monsieur THERASSSE, whom she met at the time of her stay in Bettencourt with her aunt Julie Billiart and Françoise Blin de Bourdon.  Felicity had three children: a girl and two boys. 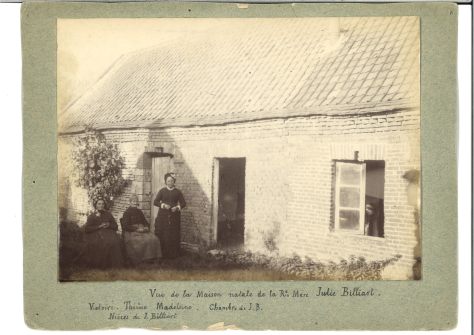 Photo taken in Rome at the time of the canonization of Julie in 1969.  In front to the left: the three superiors general of the Congregation: Sr. Loretto Julia Carroll, Sr. Mary Linscott and Mère Josépha van den Eede. -On the right: the young woman with glasses is Armelle Hoguet.  She came with her grandmother, Madame Marius Hoguet (born Adrienne Delahaye – Julie’s great great grandniece), her uncle, Gérard Hoguet (to her left) and her father Hervé Hoguet (on her right).  -In the back:  next to Sr. Mary Linscott:  Father Bellamy (pastor of Cuvilly); the tall priest is the bishop of Beauvais, Monseignor Desmazières. 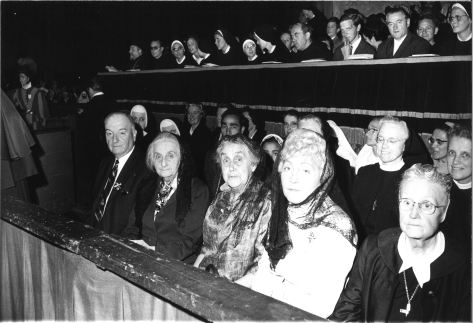 Photo taken in Rome at the time of the canonization of Julie in 1969:  Julie Billiart’s family – from left to right:  Monsieur Gérard Hoguet, Madame Marius Hoguet, Mademoiselle Yvonne Neyret, Madame Bonnet-Deleurme (of the branch originating from Felicity’s descendants)