HOW JULIE BECAME A SAINT – CANONIZATION

In 2019, the Sisters of Notre Dame, forming a large international family, are celebrating the 50th anniversary of the CANONIZATION of their foundress, Saint Julie Billiart.

The General Archives of the Congregation and the Heritage Center produced an EXPOSITION in order to understand the process as to how Julie became a saint.  Several panels displaying some of the documents of the time tell you, by means of a timeline, the events between 1881 and 1969.

The exposition is accessible during the hours when the Heritage Center is open (Motherhouse of the Sisters of Notre Dame, 17, rue Julie Billiart in Namur, Belgium):  Monday to Friday from 9:00 am to 12:00 noon and from 1:00 pm to 4:00 pm (weekends, holidays and groups as requested).

Holiness by Popes Paul VI and Francis. Click and read the document.

Pictures of the exposition in the Heritage Center in Namur. 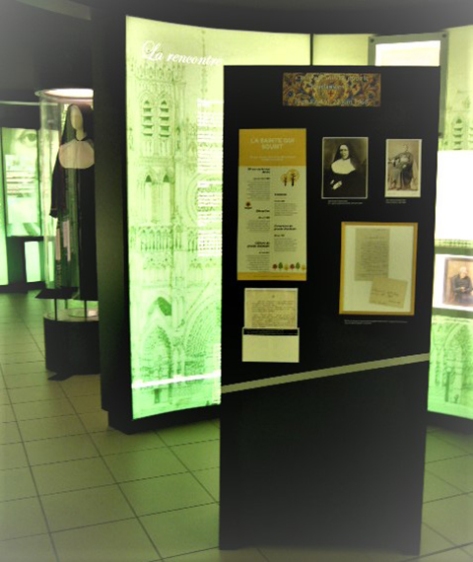 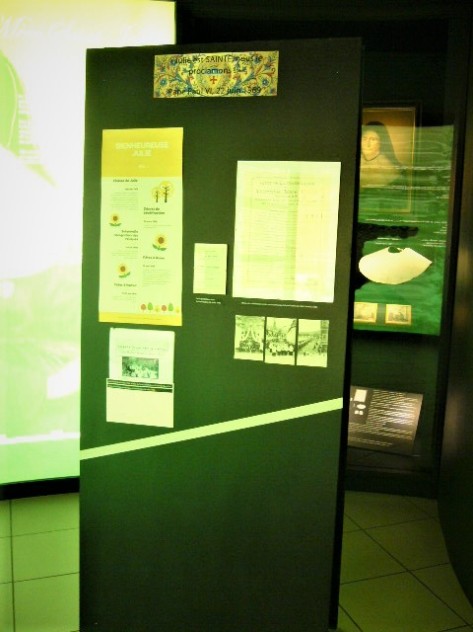 The 6 stages of the process of the canonization of Julie Billiart:

Investigation in the ARCHIVES on the canonization of Julie Billiart

50 years later, how does Julie’s holiness still serve as an example?  How does she inspire all those who walk in her footsteps:  the sisters, volunteers, friends, teachers and students? 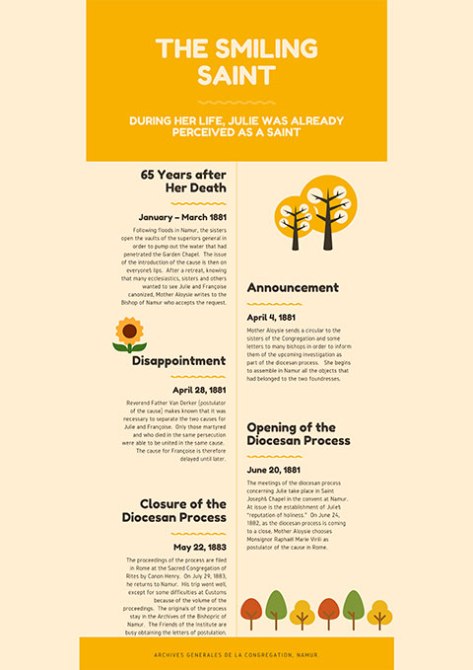 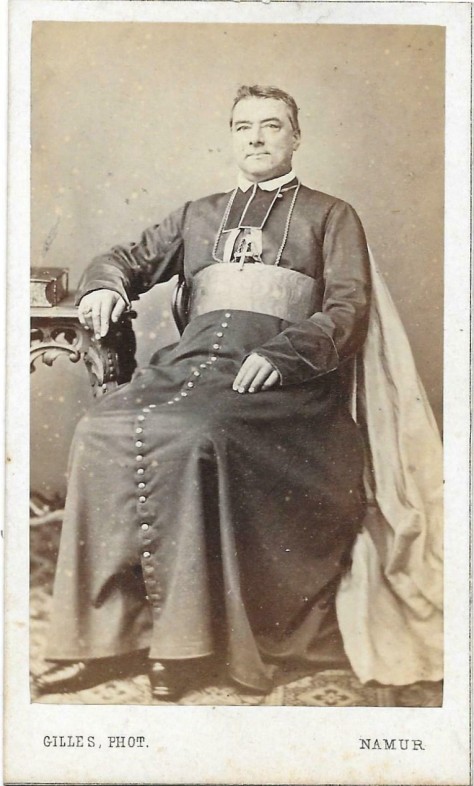 Letter of Monsignor Gravez, Bishop of Namur, which accepts the request of Mother Aloysie with respect to the introduction of the causes of Julie and Françoise.

Note of invitation to the diocesan process

Three large related volumes with all the letters of postulation for the purpose of the Introduction of Julie’s cause, General Archives of the Congregation, Namur.

Cabinet with all the official documents related to Julie Billiart’s cause, General Archives of the Congregation, Namur.

Letter of postulation to introduce Julie’s cause signed by the Queen of the Belgians, Marie-Henriette (wife of King Leopold II), 1888.

Decree of introduction of Julie’s cause, 1889.  Julie becomes Venerable.

Shrine of Saint Julie exposed in the Heritage Center at Namur. To know more:  http://www.snddenheritagecentre.org/MUSEE/index.php/la-  mort-de-Julie/chasse 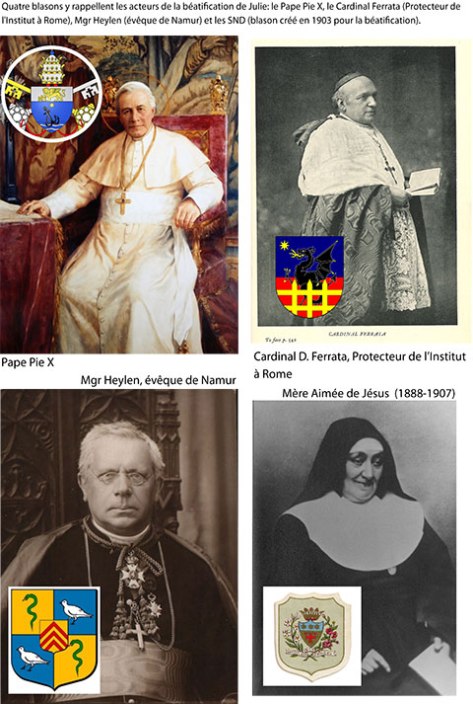 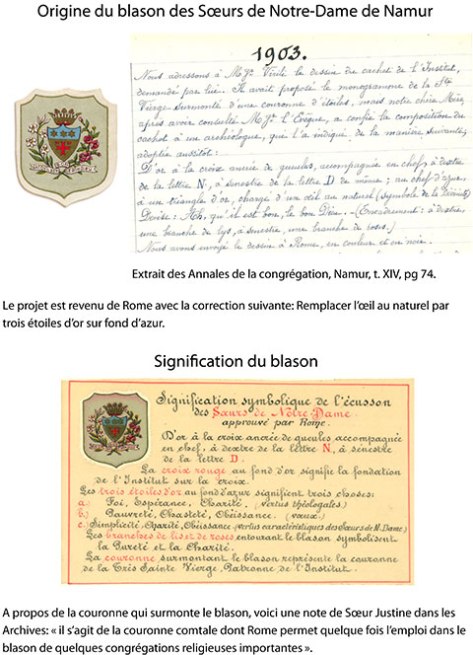 Origin and meaning of the crest of the Sisters of Notre Dame de Namur.

Poster of the celebrations in Namur for the beatification of Julie, May 17-21, 1906. 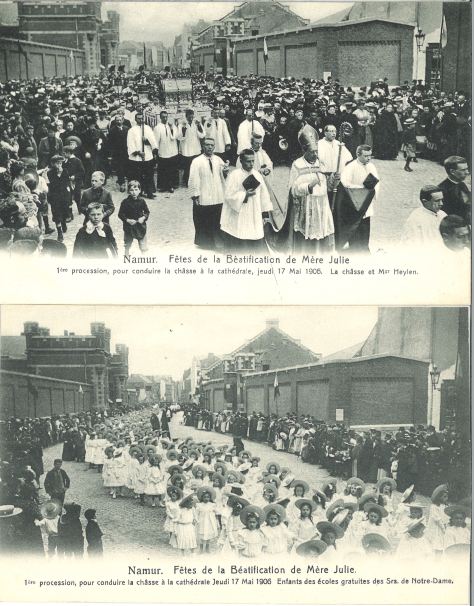 Picture of the celebrations in Namur, 1906. 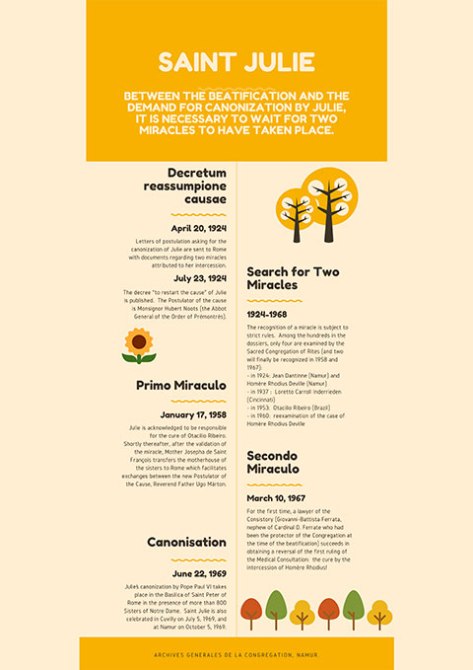 Reverend Ugo Märton, O. Praem., Postulator of the Cause, thanks Pope Paul VI for Julie’s canonization.

5: MIRACLES OF THE BEATIFICATION

“This is hagiography, the study of saintliness.  This very praiseworthy study has often turned its passionate gaze upon the MIRACULOUS ASPECTS of saintliness; and it has been so engrossed but the latter as to fix attention on observation of miracles, almost equating saintliness and miracle.

Thus sometimes, IN OTHER AGES, devotion to saintliness was considered as having leave to adorn it with IMAGINARY MIRACLES AND AMAZING LEGENDS, not, perhaps, with the intention of offending historical truth, but as a gratuitous and conventional tribute, a floral and poetic one.

NOW it is no longer so.  Miracles remain a proof, a sign of saintliness; but they do not make up its essence.  Now the study of saintliness is focused rather on HISTORICAL VERIFICATION OF THE FACTS and the documents that bear witness to it, and on the exploration of the PSYCHOLOGY of saintliness.”

To be recognized as blessed, Venerable Julie must have accomplished at least one miracle after her death.

The recognition of a miracle is subject to strict rules. A medical investigation is conducted on people to prove their miraculous healing through the intercession of Venerable Julie.

In 1905, three miracles are attested by the Sacred Congregation of Rites.

Louis Waëlens miraculously healed by the venerable Julie in 1886. 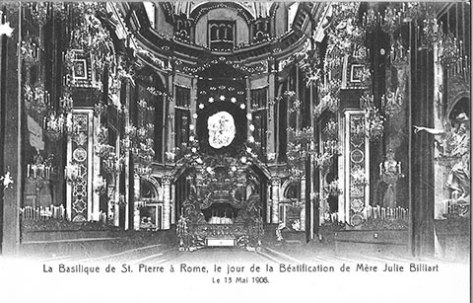 6: MIRACLES OF THE CANONISATION

The sisters received hundreds of letters attesting to miraculous cures by means of the intercession of Blessed Julie.  Among the hundreds of files, only four had been examined by the Sacred Congregation of Rites (and two will be finally recognized in 1958 and 1967).

The first miracle recognized is that of Otacilio Ribeiro.  The story takes place in Campos Novos, in Brazil, on September 29, 1950.  Otacilio Ribeiro, a young farmer of 29 years, is taken to the hospital by his father because of a tumor in his lower abdomen.  They are welcomed by Sister Maria Bardona and Sister Mary Ludivine, of the Cosfeld Sisters of Notre Dame.  Having performed an incision, Doctor Janh Martins Ribeiro determines it to be impossible to proceed with the removal of the tumor which is inaccessible and he pronounces the patient doomed.  “Sister,” says the doctor, “he will not live an hour longer.”

The two sisters of Coesfeld and a third, Sister Maria Adelaide, then begin to pray to Blessed Julie.  The next day, Otacilio revives; Sister Ludivine invites him to join in their prayers and she applies a relic of Julie to the site of the incision.  The doctor only gives him three days to live.  However, a few days later, Otacilio calls to sister:  “Sister, there is something unusual.  I can’t explain it but it’s different.”  The next day, Otacilio is able to sit up.

A week later, Otacilio is cured.  His parents offer to the sisters 3 1/3 lbs. of wax for candles and Otacilio promises to name his daughter Julie if he has one someday.

In 1957, Mother Mary Verona, the assistant to the Superior General of the Coesfeld Sisters of Notre Dame, writes to Sister Ludivine in Brazil so that she might submit Otacilio Ribeiro’s miracle to the Sacred Congregation of Rites.  On January 17, 1958, the miracle is authenticated.

As for the second miracle, it is recognized by the Vatican on March 10, 1967.  It concerns the miracle of Homère Rhodius, dating from 1919.  At that time, Homère Rhodius was 69 years of age.  He suffered from a uremic crisis that, in but a few days, reduced him to a critical state.  The doctors judged the illness to be incurable. Homère Rhodius’ daughter, Sister Marie Ludovica, was a Sister of Notre Dame of Namur; she began a novena in the Garden Chapel where Julie was interred.  A relic was applied on the site of the malady and, instantly, the condition of the patient improved significantly.  In less than a month, he was perfectly cured.

Submitted in 1924, at the time of the resumption of Julie’s cause, this miracle had not been validated by the Vatican.  It is the first time that a lawyer at the Consistory, Giovanni-Battista Ferrata, succeeded in obtaining a reversal of the first ruling of the Medical Consultation. 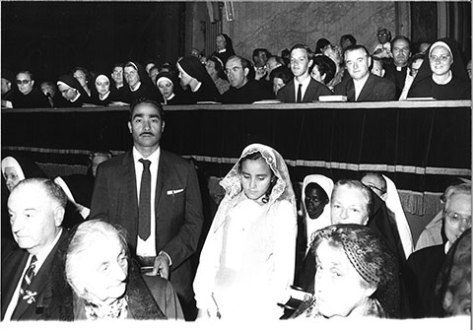 Positio Super Miraculis listing the two miracles of the canonization, 1968. 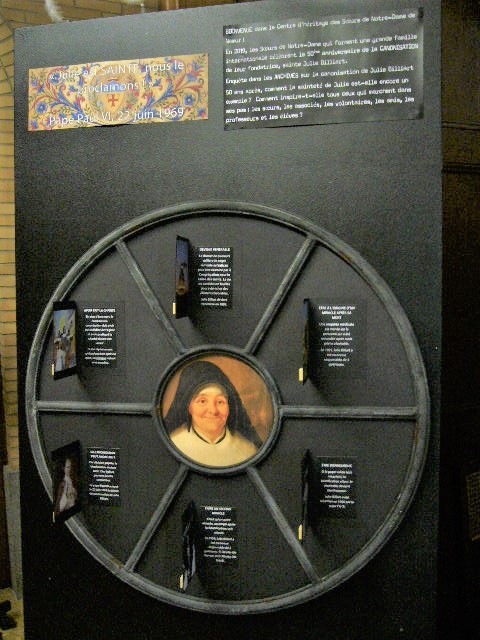 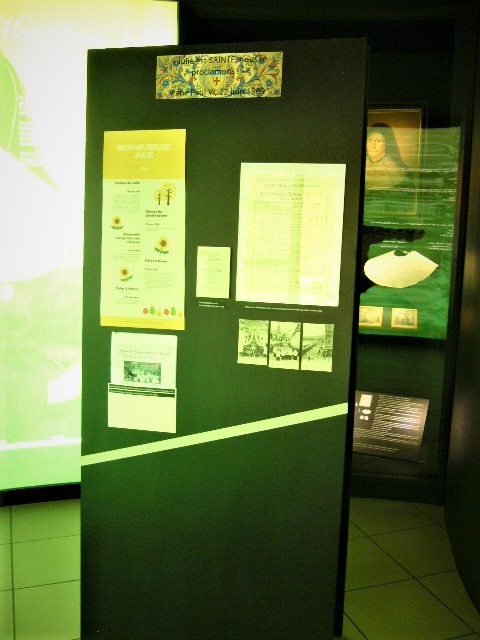 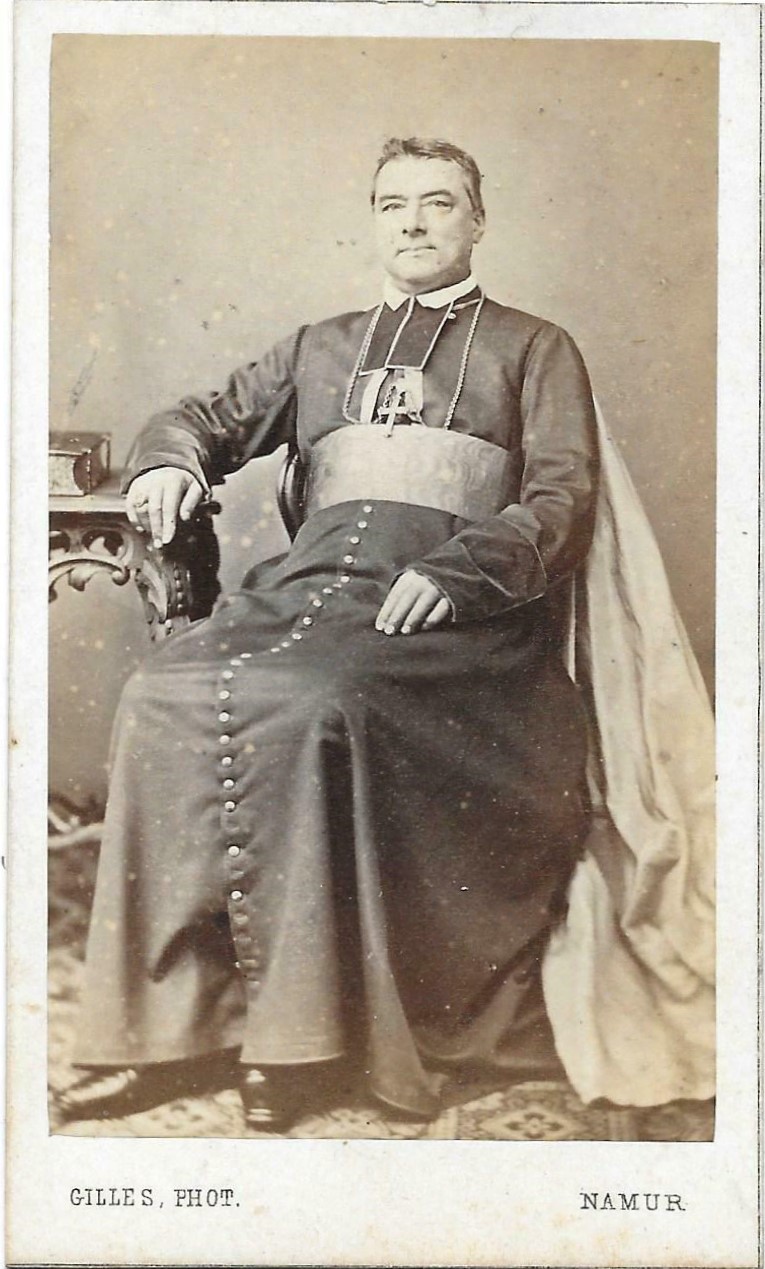 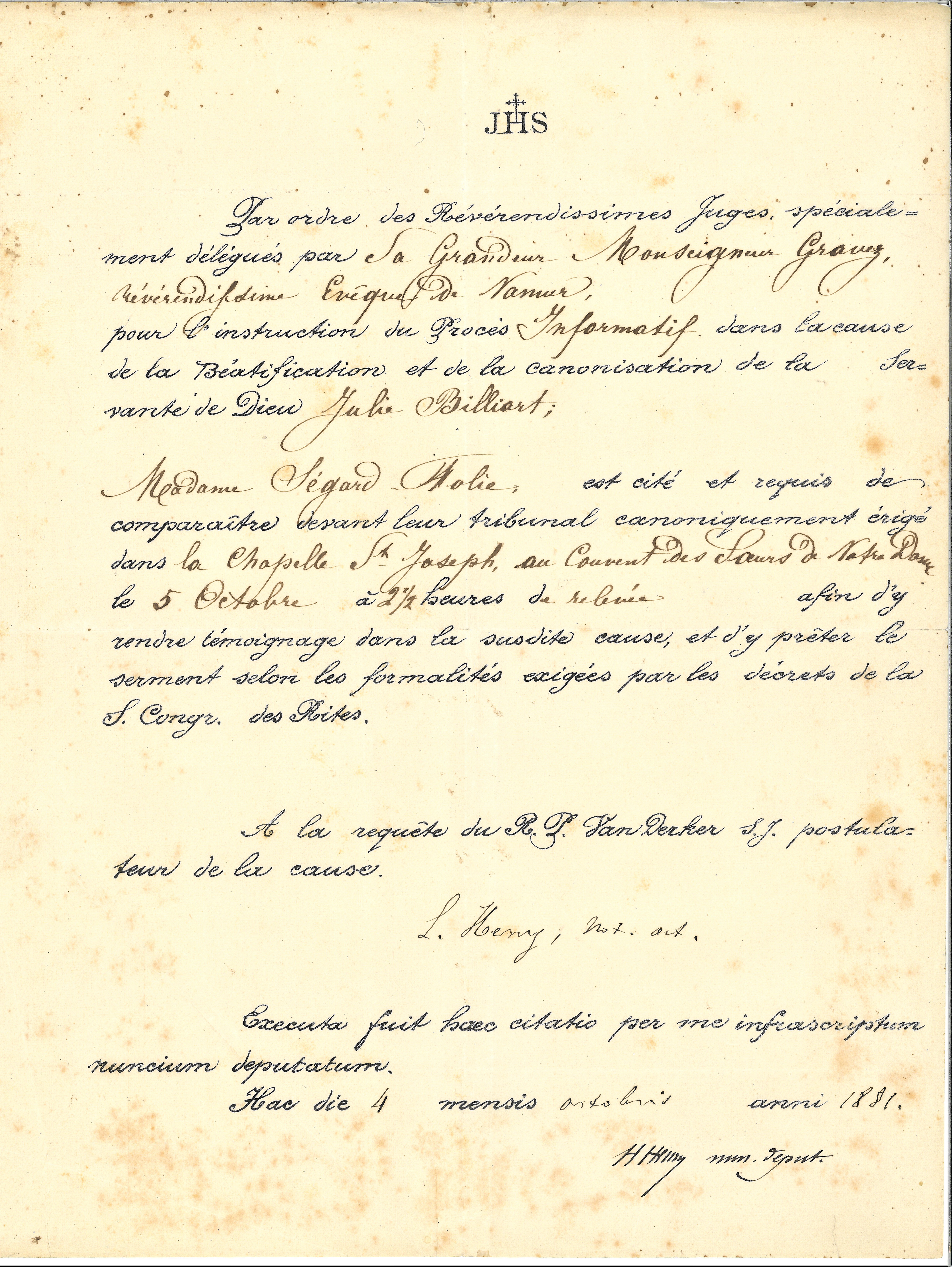 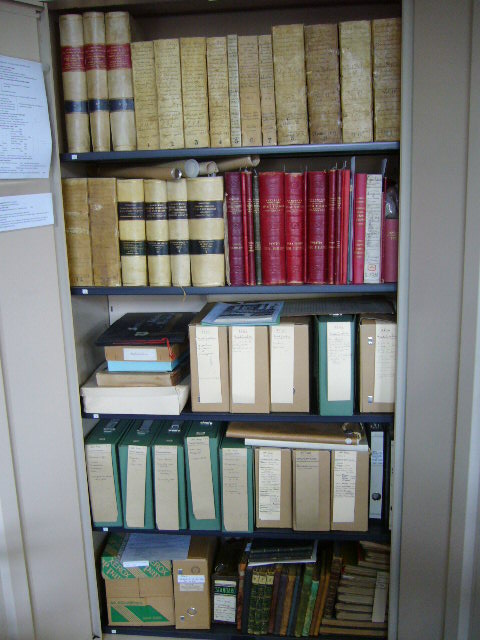 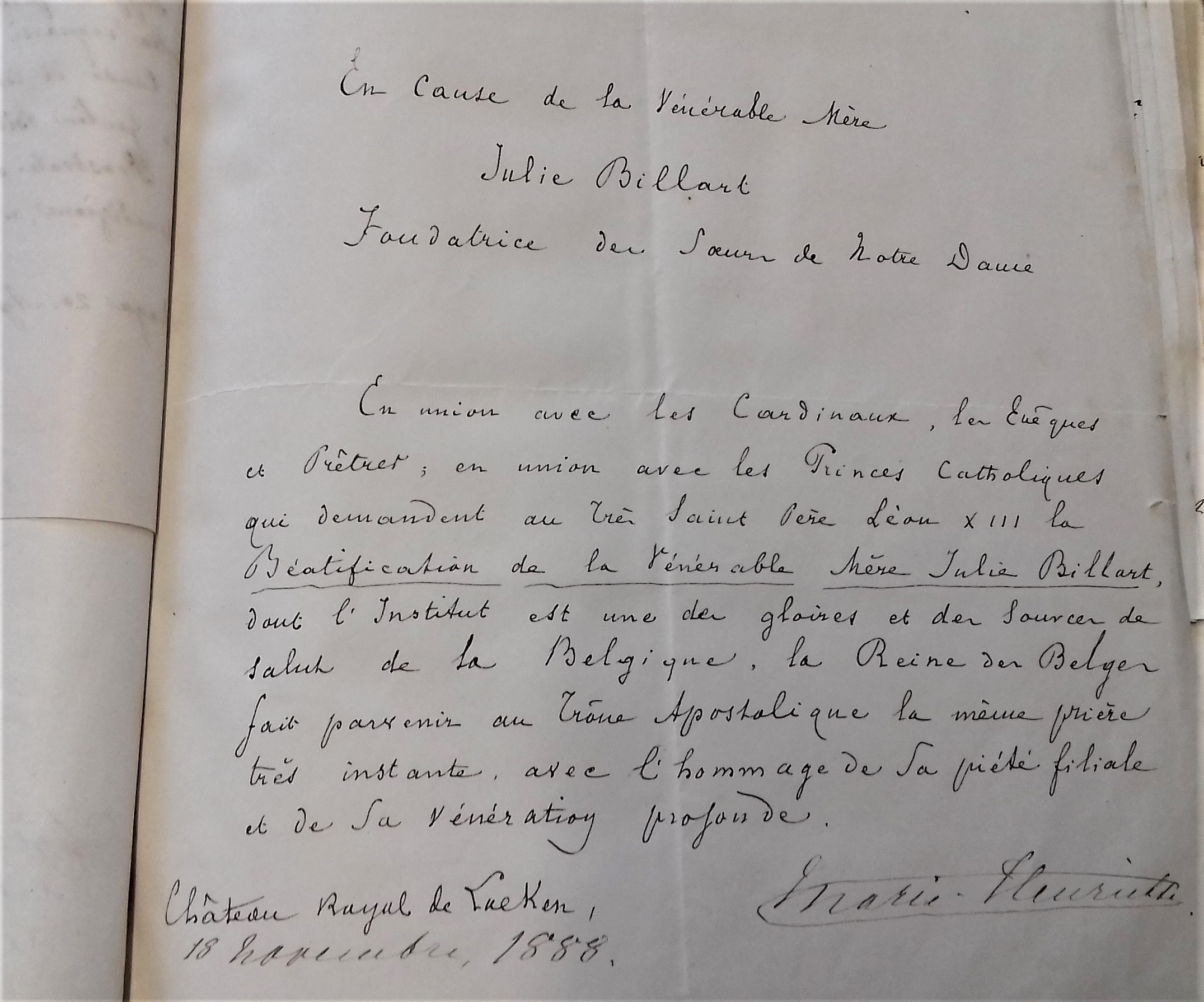 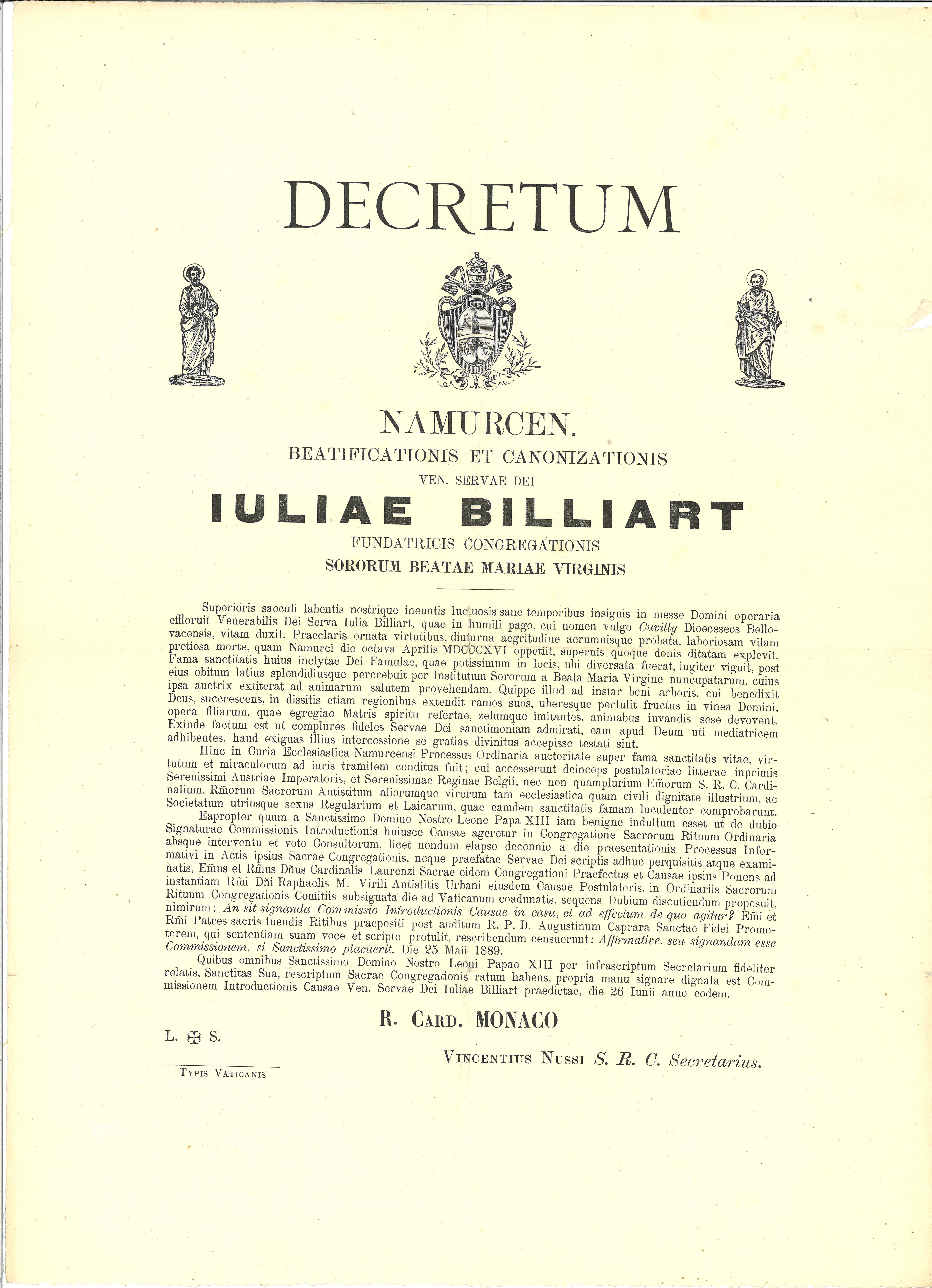 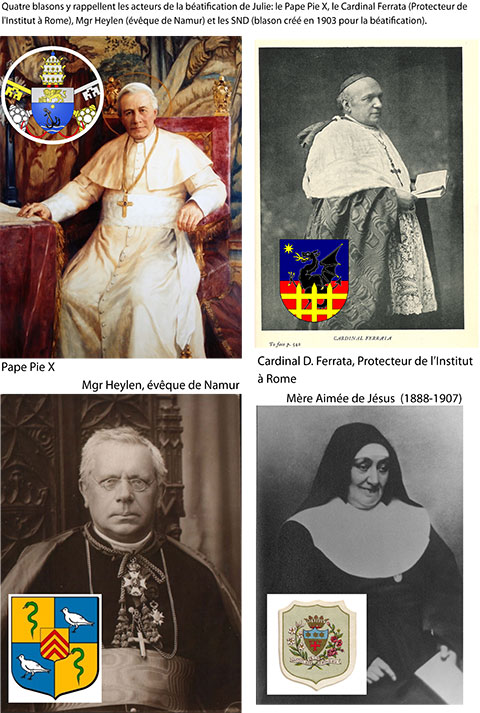 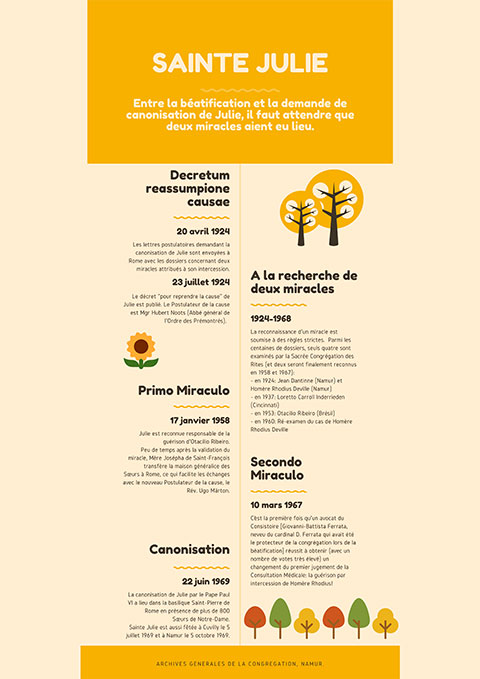 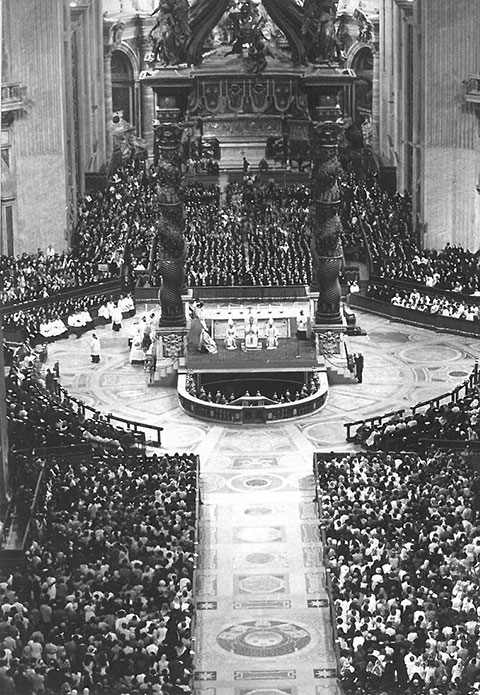 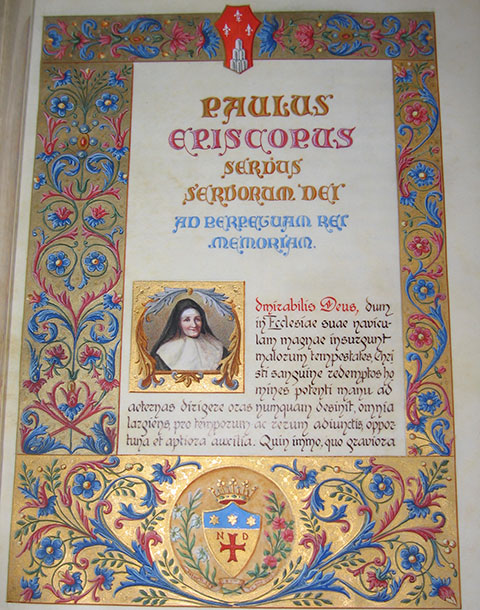 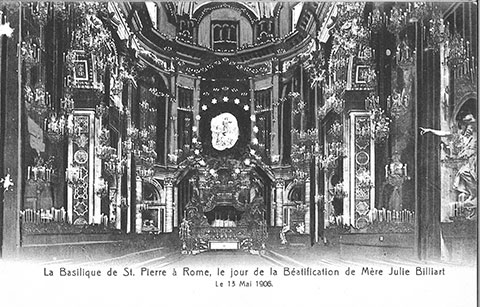 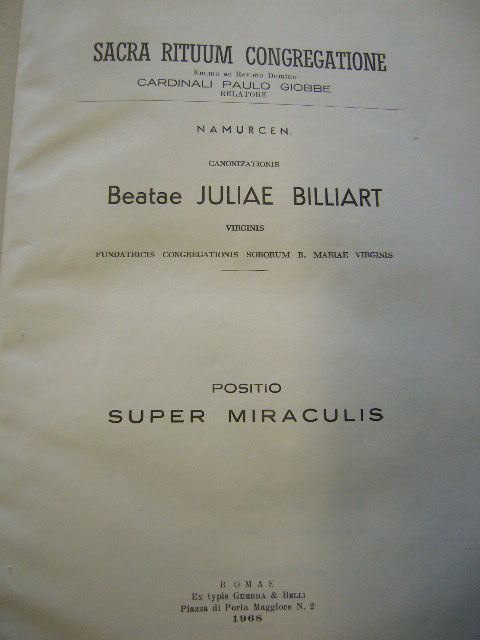 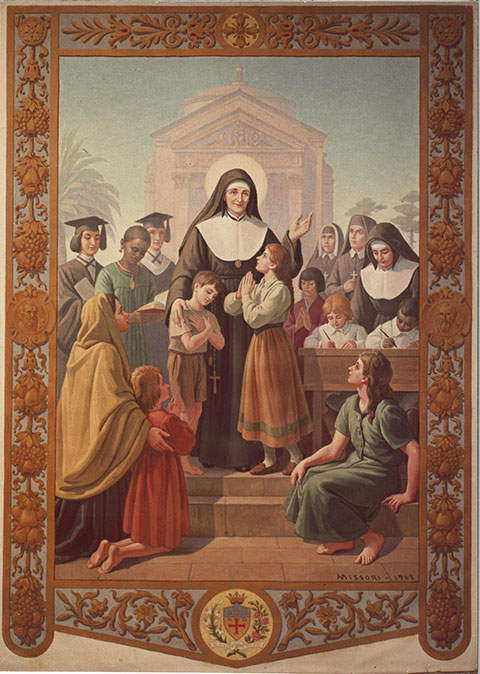