The point of departure for Julie, as that of all the saints, is faith; with her, faith in a Good God, a God who is Father and whose compassionate love enfolds, sustains and carries her, whatever the circumstances of life. She believes in this wise, generous and personal love throughout her life, whether in the poverty endured by her family, in illness or in the life-threatening dangers of the Revolution.

For this theme of the month of February, we are going to discover how Julie experienced the goodness of God during her youth in Cuvilly, a little village in the north of France where Julie was born and lived for the first 40 years of her life.

SECTION 1: THREE NARRATIVES ABOUT JULIE AND HER LIFE IN CUVILLY:

In the Archives of the Congregation we do not have direct testimonials from anyone who knew Julie during her early years in Cuvilly. It is through the viewpoint of THREE PEOPLE who knew Julie well that we are going to discover how Julie experienced God’s goodness during her youth.

January 20, 1820
It is he who teaches us the most about the Julie’s youth because he went to Cuvilly shortly after Julie’s death in order to collect testimonials from her contemporaries. Here is the information that I have been able to gather about the early years of Julie Billiart, he wrote. I am all the more certain about what I write since I knew her very well and heard from her own lips most of what her brother has just told me. He is referring to the younger brother of Julie, Louis Billiart (1754-1832)

June 18, 1852
Father Sellier gives us details concerning Father Dangicourt who will play a considerable role with respect to Julie.

Between 1818 and 1838
The Memoirs of Mother St. Joseph contribute some details

We will add some details provided by Sister Theresa of the Passion (Elisabeth Lomax) in 1881 and through Father Clair,  who wrote a biography of Julie, written in 1895 (this latter had access to many documents, today disappeared due to the bombings of 1940).

SECTION 2:  PEOPLE WHO ENCOURAGED JULIE IN HER FAITH IN A GOOD GOD

Why would one already hear of Julie spoken about in Cuvilly as “the saint who smiled”? Wouldn’t it be that the populace intuitively perceived in her this smile of God’s goodness imprinted on her face?

Julie, as soon as she attained awareness, always made this choice of life proposed to each one at the beginning of the Bible: Deut. 30:19 “I set before you life and death, blessing and curse; therefore choose life, that you and your descendants may live.”

It is thus that, step by step she advanced in life surrounded by those who confirmed her in her identity as “a well-loved daughter of the Father.” 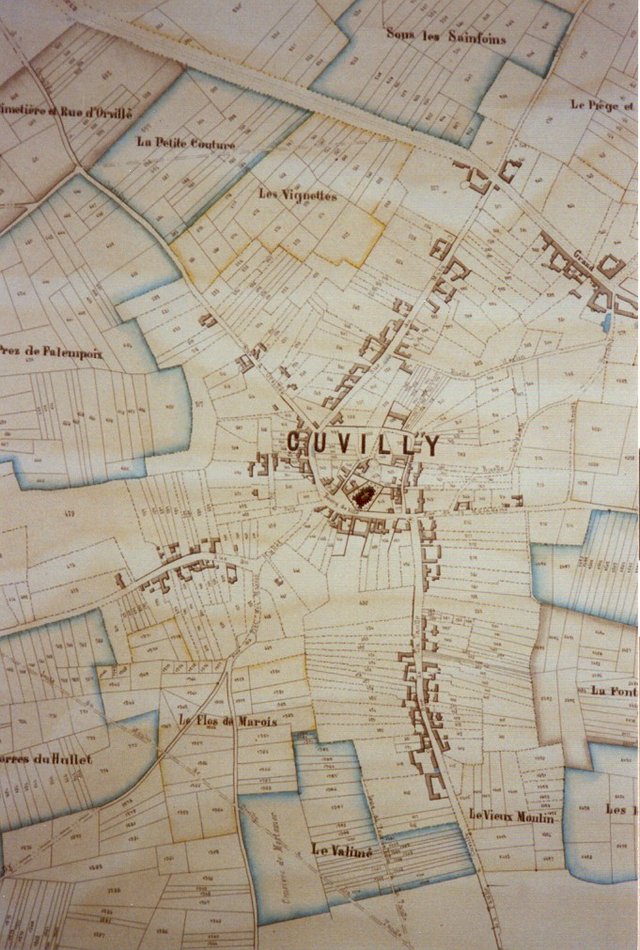 Interactive map with people who encouraged Julie in her faith.
Drag your mouse over the map and click on the icons.

While touching on this goodness that was revealed to her by God Himself: in prayer, the Eucharist, the benevolent people who surrounded her, Julie did not keep for herself this inestimable treasure and she, naturally, stimulated this awareness in others with whom she was acquainted!

In his letter of 1820, Father Trouvelot describes an active and sociable child. From the age of seven, after school, “Julie read good books and taught the catechism to the other children.” According to the declarations of the villagers and as collected by Father Trouvelot, “people never saw Julie in places of public amusement. Prayer, reading good books and teaching other children, directing them away from the occasion of sin, this was her recreation.” Julie “by nature was very quick-tempered, but she learned, with God’s grace, to moderate her natural vivacity so well that even in childhood she let no one suffer from it.”

Father Trouvelot learned from her brother that if she felt she had been too quick with her younger brother, she punished herself for it immediately, and she knew so well how to make up for these small failings that she was the only one who complained about them.” “While she was still a child and in her father’s house,” relates Mother St. Joseph, “she began instructing the poor children in the truths of religion. There was one who was a beggar; the lessons she gave helped him to find the means to earn his livelihood. I saw a letter he wrote her more than thirty years later, well composed, expressing his faith and gratitude; he said that after God she had been the principal cause of the happiness in his life.”

After her Communion, Julie began “to assist her parents by working in the fields: and visiting the Blessed Sacrament in the afternoon or evening.” During the permitted break in the middle of the day, she assembled the harvesters, men and women, speaking to them of the Good God and having them sing hymns.”

After the theft of her parents’ shop, “Julie, 15 years of age, redoubled her efforts to help the family, securing work in the fields at a harvester, where none of the field-hands could surpass her. Meantime she neglected none of her spiritual duties; each week she went to confession and communion with a devotion and recollection that revealed how deeply she was aware of the greatness of the act she was performing. She seemed to draw from the Eucharist the strength, even physical, that she needed to sustain the great fatigues she bore to relieve the distress of her parents.”

Father Trouvelot also recounts how, one day, Julie “placing her trust in God,” made a bundle of goods and “set out for Beauvais, a city where she knew no one. Arriving at the city, she entered the first shop she found open and offered her fabrics for sale…. For six years, she continued her labor in the fields.”

When she was 21 or 22, Julie fell ill, “the local physician was called in, and she became the victim of his ignorance; immediately he bled her feet.” She remained “weak and infirm, and for years was unable to walk, until cured.” Her illness could have isolated her but her expansive personality and her enthusiasm inspired people to visit her. “Ill and deprived of the use of her legs, she still found good to do. Noble women, who helped her with her temporal necessities, came to seek her assistance in their spiritual needs, on the advice of their pastor. She continued to teach catechism to the children and villagers who happily gathered at her bedside.” 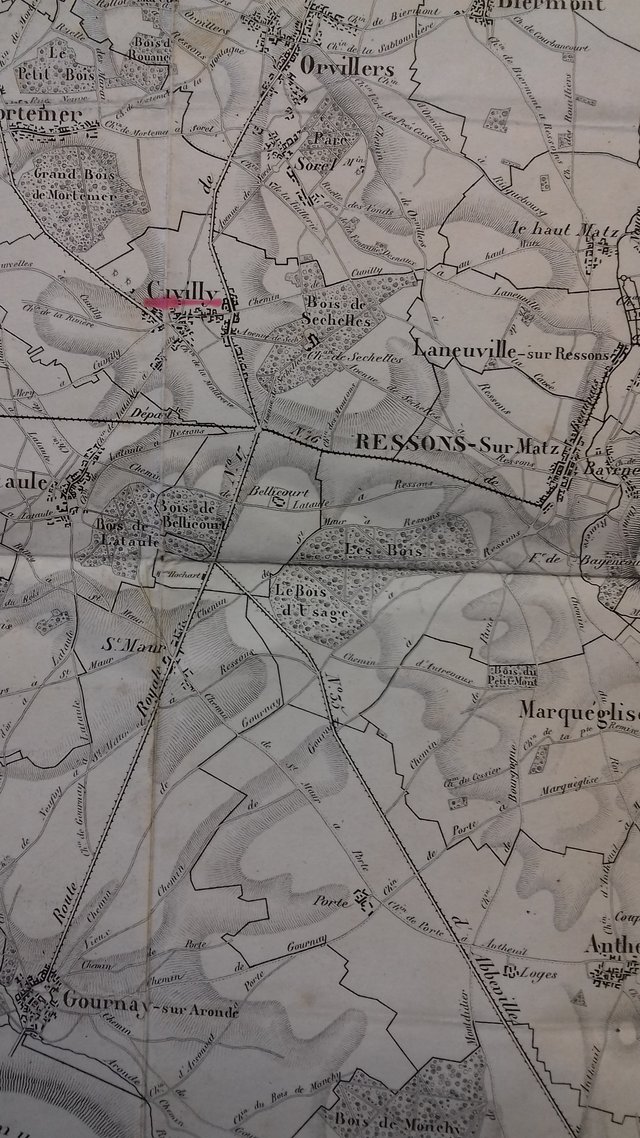 Interactive map with the noble ladies who helped Julie.
Drag your mouse over the map and click on the icons.

SECTION 4: THE GOODNESS OF GOD IN ALL THE CIRCUMSTANCES OF HER LIFE

In contrast to the rigid views of Jansenism, a movement that predominated within the French Christian Churches of her time, Julie always described God as a Good God. “This is the solid truth,” she said, “the Good God only asks of us to do the good that we can with His grace.”

Julie suffered more and more but, as St. Paul says,” It is when I am weak that I am strong” and her deep conviction of the God’s goodness was immutable in all the circumstances of her life.

During her illness:
Formerly a young woman active in Cuvilly, traveling, doing business, comforting the sick, leading the parish, Julie, now on a sickbed, waited; she grew strong in her faith spending several hours each day in prayer. According to Father Sellier, Julie profited “so well from the lessons of her holy director, Father Dangicourt, that she became in just a few years a model of edification and the long series of tests and infirmities contributed greatly to her advancement in the way of holiness by means of the virtues that this state of suffering gave her the opportunity to practice.” In her Memoirs, Mother St. Joseph speaks of Julie crosses, of her bed of suffering: “Living faith was the source of her patience while long and intimate prayer made her illness bearable, strengthened her love, and prepared her for what Providence had in store for her.”

As a postscript to his letter, Father Trouvelot reports “what some people were telling him yesterday.” “That during the time of her infirmity she used to have them come to her room for instruction, and that she went on with her lessons in spite of her suffering. They said that she taught them to love goodness and virtue, which she made attractive, especially through her own patience and kindness and the zeal she displayed in instructing them.”

In spite of the danger of the Revolution:
Julie opened the way of total confidence in God to the inhabitants of Cuvilly, disoriented by new ideas and the troubles associated with the Revolution, a confidence that reassured and guided them. “Such was the esteem that the villagers had for the poor invalid that when they were deprived of their legitimate pastor, they consulted Julie in order to know if they should obey their constitutional priest. Strong in her faith, she prevented all in the village from floundering into schism, though it earned for her the persecution of revolutionary partisans.”

Father Trouvelot says in his 1820 letter: “Julie carried on her work of teaching, especially continuing the religious education of children and others uninstructed in the truths of faith. She had the happiness of preventing many people from falling into schism.”